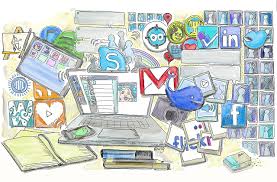 Only 51% of employees report that their workplace has rules about social media use at work, according to a recent Pew Research Center survey—which means half of the workforce is potentially at risk for litigation and security breaches.

A social media policy is just as necessary for companies as discrimination, leave, and vacation policies, said Daniel Handman, a labor and employment litigator and a partner at Hirschfeld Kraemer LLP. Legal problems can arise for businesses if employees say something negative about the company, reveal confidential information, or say something positive about the company without disclosing their affiliation, he said.

“The most important issue is when an employee says something negative, which has been the subject of a tremendous amount of litigation,” Handman said.

The largest government player in social media law is the National Labor Relations Board (NLRB). The National Labor Relations Act, passed in 1935, allows all employees the right to engage in “concerted activities” for the “mutual aid and protection” of coworkers, which the board extends to social media activities. Therefore, any policy that prevents employers from their right to express such concerns would be considered invalid.

“If you work at McDonald’s and say, ‘The hamburgers are terrible,’ that’s not protected,” Handman said. “But if you say, ‘I’m getting lousy tips because the kitchen sucks,’ that is protected,” because it relates to a working condition that impacts coworkers, he said.

Seven out of 10 employees use social media at work, according to a recent report from Bambu by Sprout Social. Half of employees report using social media for up to an hour per day at work.

Full-time and part-time employees reported going on social media for a number of personal and professional reasons, the first of which were to take a mental break from their job (34%), and to connect with family and friends (27%), according to the Pew Research Center survey. But many also used social media to make or support professional connections (24%), get information to solve problems at work (20%), and build relationships with coworkers (17%).

While having an official social media presence can enhance an organization’s communication, recruitment, research, and client base, using social media at work for either professional or personal involves the following risks, according to SHRM:

In a recent survey report from Smarsh, nearly half of respondents cited social media as the communication channel with the highest level of compliance risk.

“Concerns about electronic communications policies, policy enforcement, and retention gaps remain high, indicating many firms are vulnerable to undetected fraud, errors, and potential regulatory enforcement penalties,” the report stated. Less than half of respondents said that they are mostly or completely confident that their current strategies will identify risks for the organization, the report stated.

Some experts also blame social media on falling workplace productivity. But these platforms are not the root cause, according to Aliah Wright, a social media expert at the Society for Human Resource Management (SHRM) and author of A Necessary Evil: Managing Employee Activity on Facebook, Twitter, LinkedIn…and the Hundreds of Other Social Media Sites.

“Companies need to treat the people they hire like adults,” Wright said. “You trust them to do the job you hired them to do. If their productivity slacks off, that’s a productivity issue, not a social media issue. If people are always at the coffee maker, you don’t get rid of the kitchen. Social media is not the problem—the problem is with time management, which can be corrected.”

Company leaders should generally allow employees to use social media during work hours, said Wright. “Social media is ubiquitous for us—it’s our new telephone, and it’s not going anywhere,” Wright said. “Social media is the way in which we connect not just with friends, but with our Rolodex.”

But policies can make a difference in how often employees use these platforms, the Pew study found: At companies that do have a social media policy, 30% of workers said they use social media while on the job to take a break—compared to 40% of workers whose employers do not have such policies.

Many companies devised social media rules based on Walmart’s policy, Wright said, which the NLRB gave a stamp of approval to in 2012.

Wright recommends a social media policy include the following:

Company leadership must ensure strong cyber protections are in place to secure data, Wright said. “If you’re not teaching employees about proper password hygiene, that could be blamed on you as a company,” Wright said.

About half of states now have laws on the books preventing employers from requesting passwords to personal social media accounts to get or keep a job.

However, “an employer can under the law monitor an employee’s use of technology, email, or the internet, so long as they advise the employee that they’re doing so,” Handman said. He recommends consulting with a lawyer before taking punitive action against an employee based on something that occured on social media, he said.

Some 32% of employees reported that their employer has policies about how employees should conduct themselves on the internet in general, according to the Pew survey.

But monitoring employee social media activity on a regular basis is unusual, Wright said. “I don’t think a lot of companies have time to play Big Brother,” she added. Some employ programs that monitor their brand and what employees post to promote it. “I don’t know any company that has enough dedicated staff to spy on employee social media,” she said.